In the heart of Bangalore, lies a serene place surrounded by nature and greenery. This oasis is the Gandhi Bhavan campus housing various constructive organizations, one of which is Vallabh Niketan, one of the Six Ashrams of Acharya Vinoba Bhave, the spiritual heir of Mahatma Gandhi. It is  run by Vishwaneedam Trust(R).. Read on.........

I have walked all over  for 13 years. In the backdrop of enuring perpetuity of my life’s work, I have established 6 Ashrams. Although I have accomplished a lot, one of the achievements “Baba” would like to be remembered, is for establishing these Ashrams. Hence, 6 geographical sites were chosen. 3 in the three corners of  and three in the middle, on the lines of Adi Shankaracharya.

In 1965 Vallabh Niketan was established in reminiscence of Vallabh Swamy. I Have seen many a people with sharp intellect, but none with the purity of Vallabh Swamy. Hence, to commemorate his unique temperament, this Ashram shall be his memorial. It shall be so managed that people may indulge in self study, a bit of meditation, contemplation and resultantly- attain serenity. There shall prevail an environment of pious friendship.

Four Points to be taken care there –

With these expectations, Vallabh Niketan has been instituted. 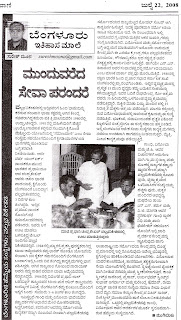 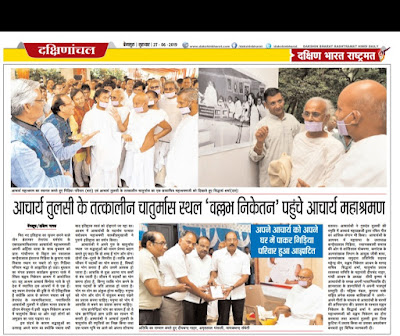 1)      Make it a hub for Gram Swaraj & Lok Swaraj revolution (As envisaged by Mahatma Gandhi, Acharya Vinoba Bhave & Jayprakash Narayan) viz; Participatory Democracy Model in place of the present Representative Democracy, which is the root of all ills of today.
2)      Increase capacity of Old-Age Home
3)      Augment ability of Childrens Home
4)      Set up a Khadi Demonstration unit in collaboration with Gandhi Smarak Nidhi & Khadi Federation in memory of Mahadevi Tai, SS Sharma & VT Magadi
5)      International Sarvodaya Centre at a larger scale

Neither federal aid solicited, nor foreign or Corporate aid accepted. Only individual and institutional helps alongwith participation as per Vinobaji’s wish of ‘Kanchan Mukti’ & ‘Shaasan Mukti’.

To understand civility, one must clearly discern between the terms – Sympathy & Empathy. Sympathy means compassion, commiseration, or in short, favorable attitude. Empathy on the other hand means the faculty & power of identifying oneself with another person. Almost all of us have an abundance of sympathy, -only rare ones have developed empathy. As a society, at every occurrence of natural calamity, courtesy saturation media coverage, a lot of aid gets generated –read surge of sympathy. But concurrently people tend to forget the millions who are struggling daily for basic sustainability, -read drought of empathy. Out of sight-out of mind syndrome? Maybe. Hence the Ashram funds are generated respecting the Sarvodaya ideals and our razor’s edge principle of managing this place solely with the help of people, but at the same time without solicitation of help.
We are privileged to have numerous individuals and social service organizations who are the Ashram’s well-wishing benefactors.
Purely voluntary donations are accepted in the name of Vishwaneedam Trust and a receipt issued.
We bank with Canara Bank, KP West Branch Bangalore 560020, India: SBa/c #0422101003660, IFSC Code #cnrb0000422.
Ashram is also certified under sec 12A of the Income Tax Department, Government of India, vide No.ACCTS/718/10A/Vol/B II/V-195: & Our PAN No is Vishwaneedam Trust AABTV5514H

A self sustained social laboratory where people of diverse caste, creed, culture, relgion. Ethnicity, age, economic status live autonomously but interdependently in harmony with nature & active participation in an atmosphere of “Bhakti, Preeti & Shanti” as per Vinobaji’s Charter for Vallabh Niketan…